Here on the mainland, our Aloha Friday is mostly celebrated with the phrase “TGIF”. So in celebration of today, I’ve made a little animated .gif (which are all the rage with designers these days) to celebrate.

Hope everyone has a great weekend!

It’s been a long week and I am needing a bit of inspiration. So I took a look back at a lot of my “Words to Remember” board on Pinterest and thought I’d share a few with you! 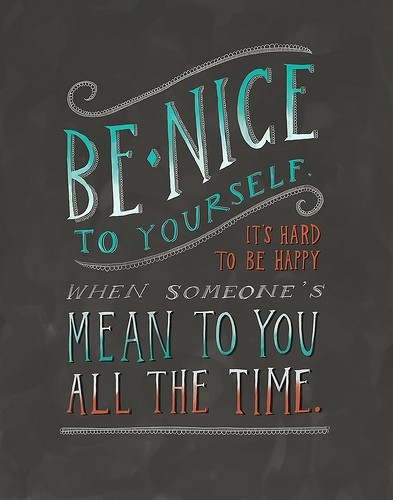 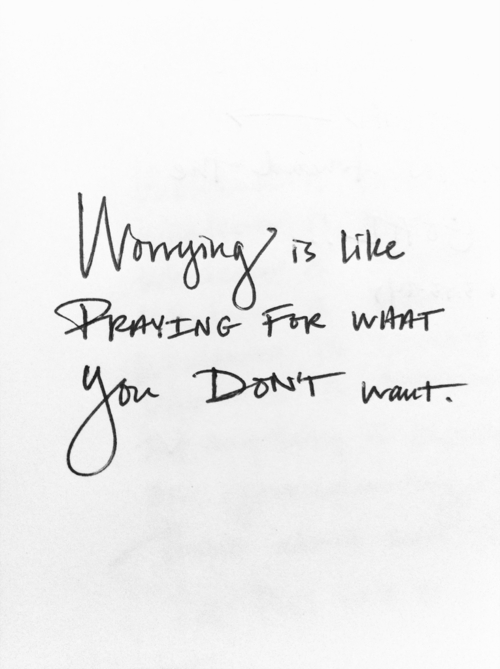 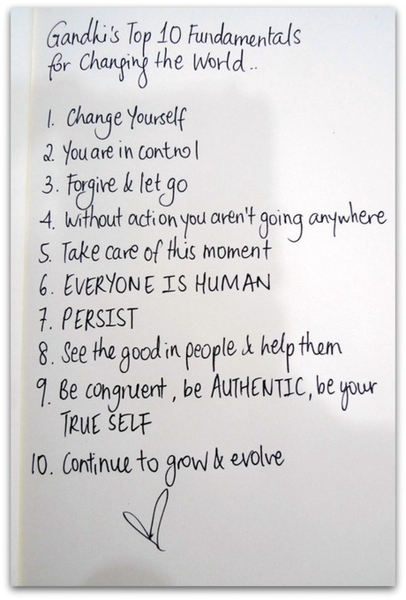 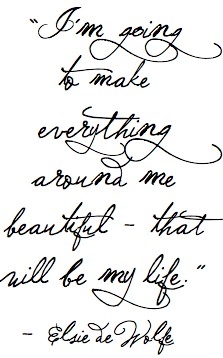 And a beautifully designed version of one of my favorite quotes:

January has whizzed past and suddenly we are already into February, when did this happen?? Week 5 included lots of Logan (who I really could do an entire 365 project on, she’s my fav subject), an epic non-stick fail (which has me wanting to toss this stupid pan), Costco loving, a package with some party treats, new Scorpio bling, a BLIZZARD, and PINK TIPS. My hair is extremely long and I figure why not have a little fun with  it before I chop some off. 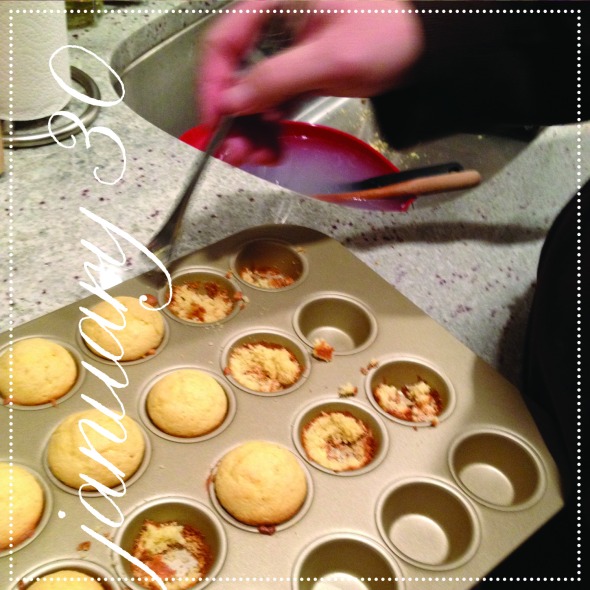 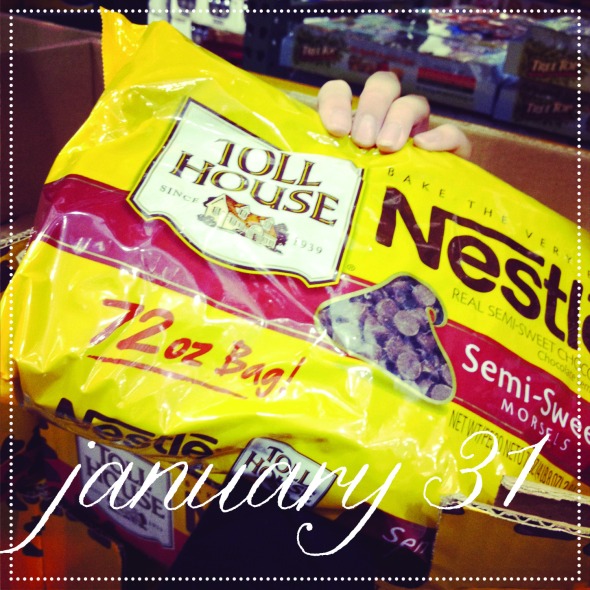 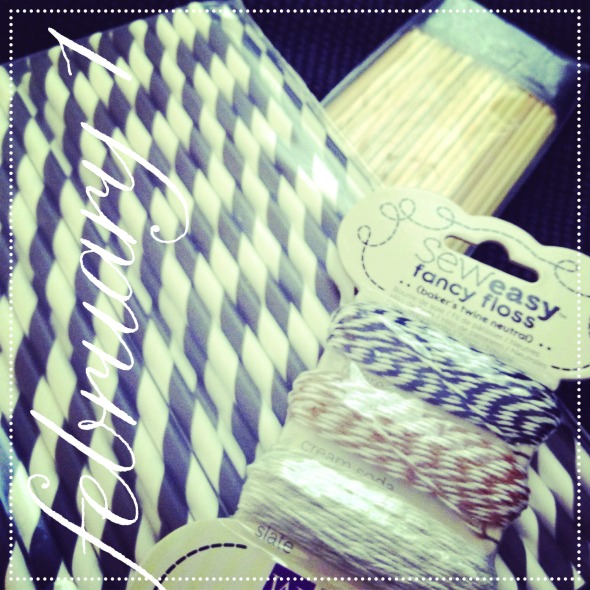 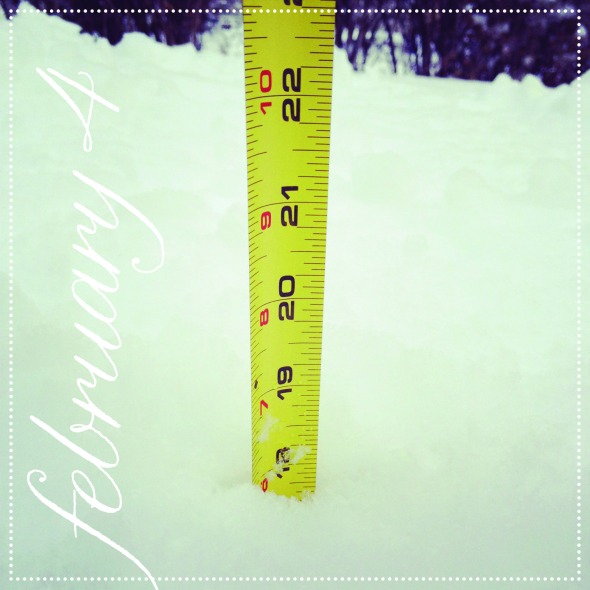 Hope everyone had a good weekend!

I’m a bad blogger these days. But here are last week’s pics! The week included a sneak peek of the new studio bedding, some pure barre, lots of skiing, a fashion don’t, a little art project, and an ikea visit (all for the studio, which I can’t wait to show off, but am still waiting for several things). 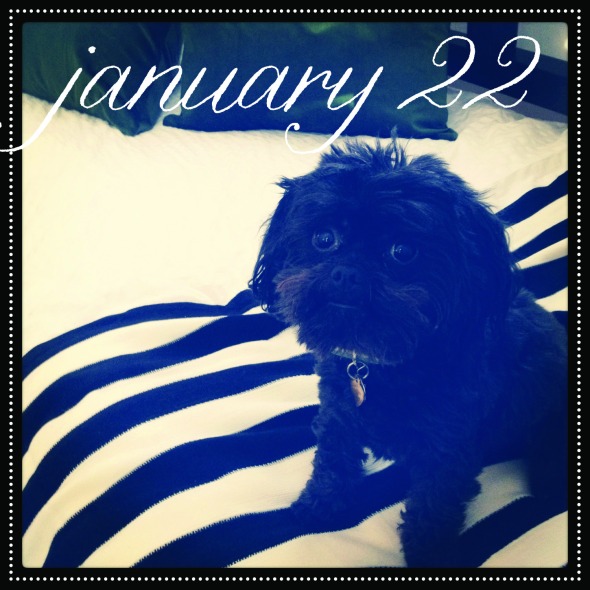 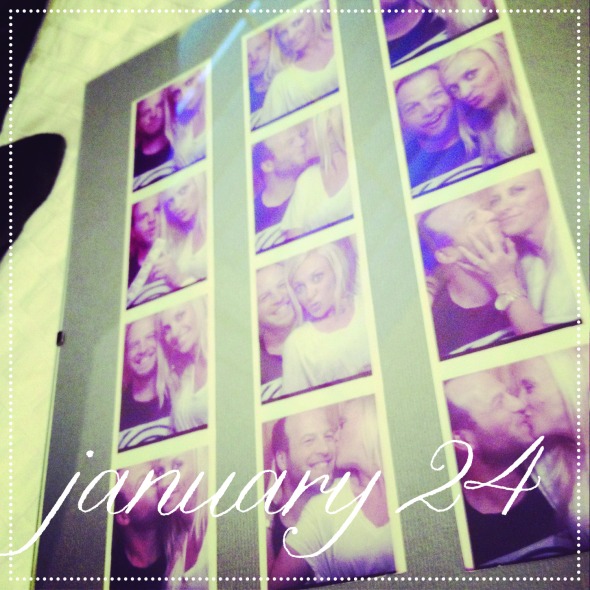 Week 5 is coming on time in several minutes, wahoo!

Monday post of new pics, finally getting on track.

Last week included lots of good food (the last batch of pesto made from my basil last year) and wine (a trip to Vinue, a self-serve wine bar), some Nuggets action, some beautiful weather (the still-melting snow is deceptive, don’t let it fool you, it was in the 60’s in January in Denver), a not so painful dentist visit, and a big decision to redecorate my office (now to be known as my studio). 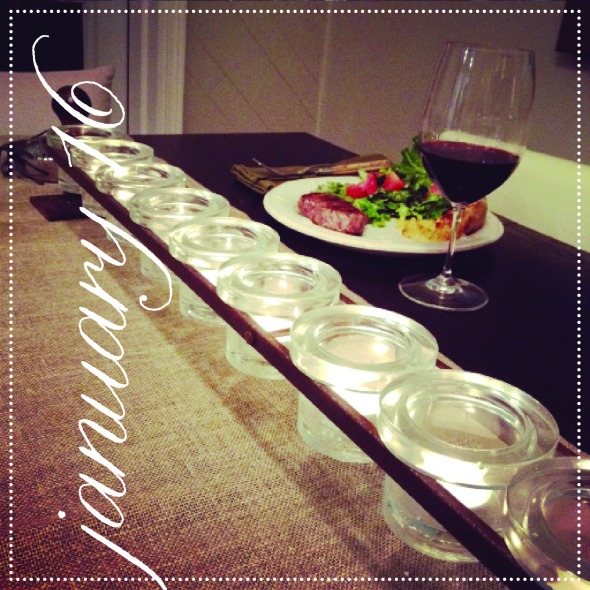 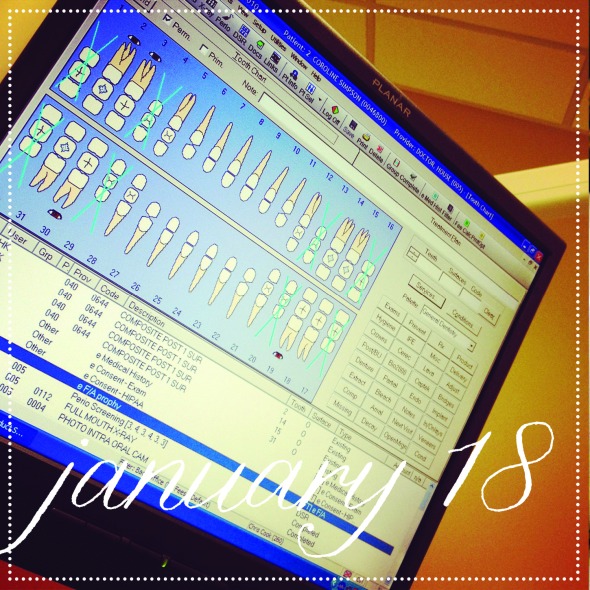 Hope everyone had a nice weekend!

I’m off to meet a friend for lunch who is also completing a 365 photo project this year and just the thought of telling her I didn’t upload my pics on week 2 already made me want to upload right away. I blame it on the short week! 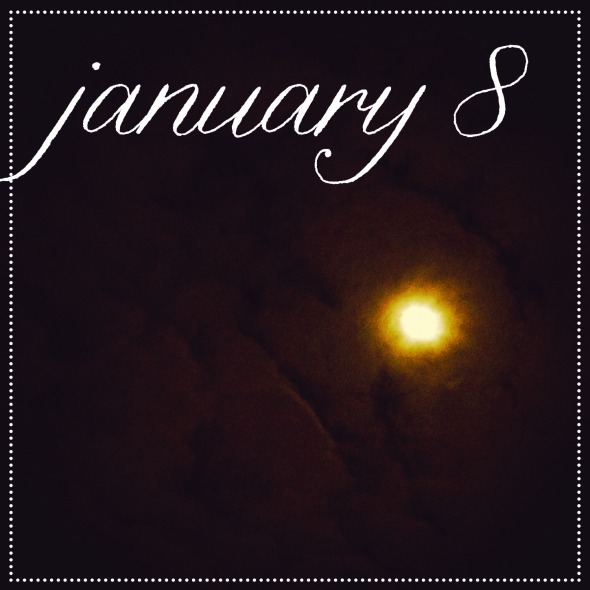 Hope everyone is having a nice week!

the joy of polaroids: parties + a guestbook idea

For my wedding last June I incorporated some of the new Polaroid cameras with the guestbook. My cute cousins, Natalie and Madeline, took pictures of guests and sent them towards the guestbook where they put their photo in and wrote a note. It was a fun way to remember the evening and I’m so happy we have it as a keepsake to look back from the evening. 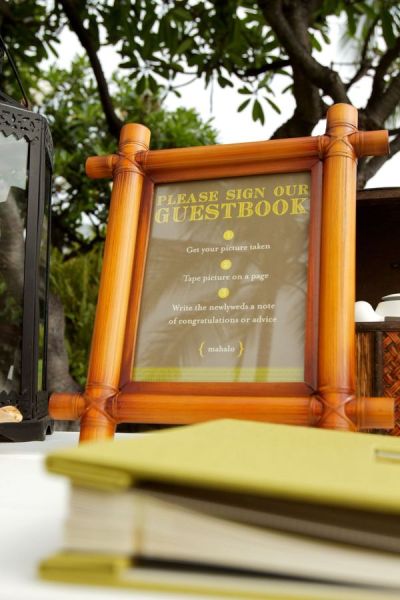 While out in Hawaii over Christmas we pulled out the cameras and leftover film and brought it along to Hokulia (actually our wedding venue) for a New Year’s party. It provided for cute, fun keepsakes of the evening (not to mention entertainment and a reason to wear New Year’s crowns). We even took some party pics of other guests and gave it to them as a keepsake. 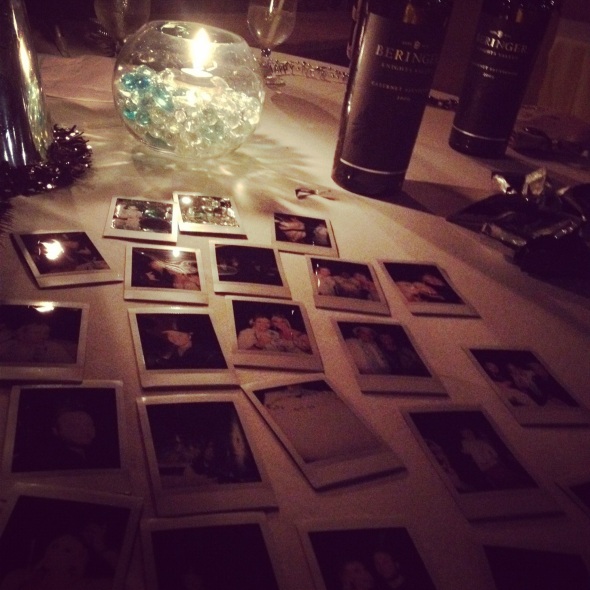 And an Instagram photo, because there’s no better way to end/start a year.

Anyone else have a new or old polaroid laying around they like to bust out for special occasions?

Today it is snowing. This was a surprise to everyone, even our meteorologists (who stressed multiple times on the news that this was not the largest missed snow snowstorm, which didn’t seem to be a very strong argument for their skills). Working from home is a major advantage to me when it snows. Today there was an even bigger perk, watching our across the street neighbor. The house across the street is a rental and has provided a good deal of entertainment to me since I moved in. It’s residents have included college students and a very mysterious woman who moved out three months after her arrival in the dead of night. After that the house was abandoned for awhile (unbeknownst to the owner) and finally the city gave multiple warnings of impending fees because their grass was so overgrown.

The newest resident is a Texan. We know this because of his license plate, but even if he had Colorado plates we would know he’s not from here. When I left for Hawaii we received over a foot of snow. Mike left for work one morning and found this note on his car:

If you live in Colorado (or honestly, even if you don’t), you should find this funny. A foot of snow isn’t exactly “digging” your car out and our city-owned street doesn’t exactly have assigned parking. Despite it’s strangeness, the note is very charming in a polite way that probably only a Texan or a southerner could pull off.

Today the Texan was out in full force. He likes to keep his stairs and car shoveled even when it’s still snowing. I snapped this creepy photo because if you’re weird enough to leave my husband a note like that, I think it’s okay I take a photo of you shoveling in the midst of more snow.

I was having a good time just thinking about the fact he was “shoveling out his car” (mind you, he didn’t go anywhere, his car is still here…) and then I see him come across the street. I think to myself, what is he doing? Not kidding, he shovels out the spot Mike’s car was in. I can assume this was done in hopes that Mike would not swoop in and take his own newly “dug out” spot. This is puzzling on many counts. Perhaps he should invest in snow boots instead of spending so much time and worrying about shoveling. 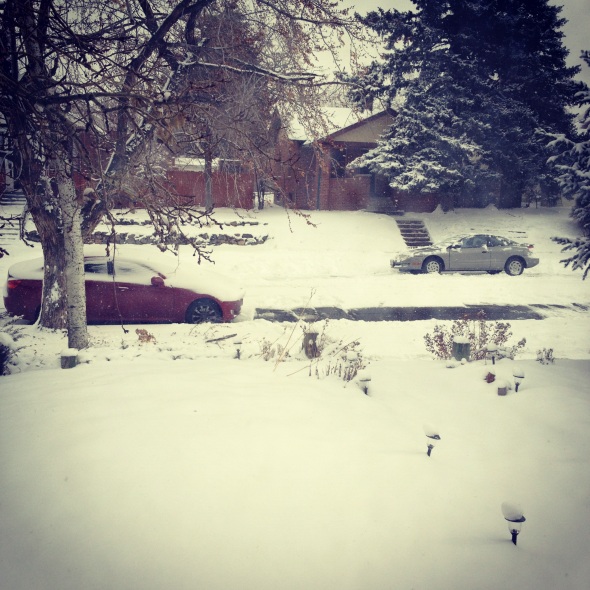 This is the project I mentioned last week. 365 day projects are a bit tired, but can be really nice when done well and I haven’t done one (and this one would seem to make a nice keepsake). For 365 days I will take at least a photo a day on my iphone (again, much thanks to the creators of Instagram and Hipstamatic for making me seem like a somewhat better photographer than I actually am) and I will lay them out into a book format. I saw this idea on pinterest (thanks again to the greatest time-suck of our era) and thought it would be really cool to have an entire year of photos, each day featuring some aspect of life in 2012. Thanks to Blurb there is an InDesign plugin which will allow me to lay this out and design this as a really nice book. Below is a sample (week 1!), each week will be a spread with seven photos featuring the dates and a small caption for each image. The layout isn’t final yet, I just wanted to go ahead and get started.

Each week, to hold myself accountable, I will post the photos from the previous week. I think because January 1 was on a Sunday I’ll post these typically on Mondays. So, here we go, here’s week 1 and my attempt to capture everyday life from my iphone. 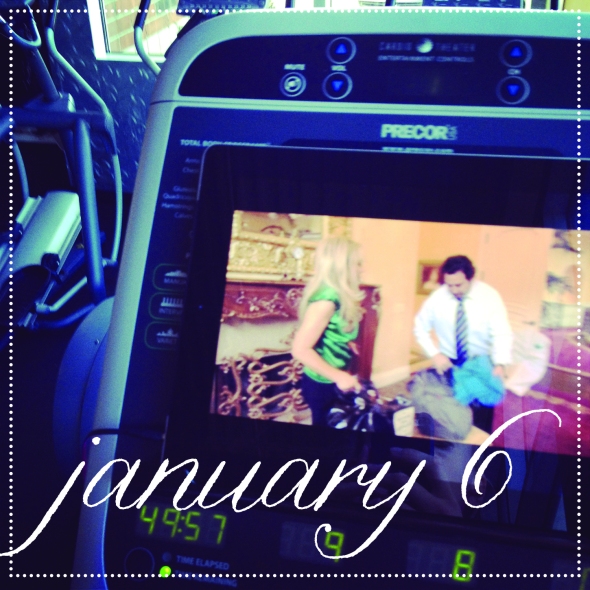 My family and I are longtime Apple fans. I confess, we briefly cheated on them in the 90’s, but there are reasons for that (one of which being Apple’s fall from grace during Steve Jobs’s banishment), all of which are explained in the new Steve Jobs bio. We even owned one of the original Macintosh computers. Over my last visit to Tulsa, I found some of the old disks from our second Mac (strangely hidden in plain site in a trunk in our living room also containing a plethora of troll dolls…).

There were quite a few interesting facts and I’m pretty sure my family would appreciate me never reading another biography as each time I came up for air from the book I recounted several Steve Jobs facts. Here are a few I found most notable:

1. Steve Jobs appreciates graphic design. In his brief stint at Reed for college he took a calligraphy class, which gave him a great appreciation for things such as kerning and leading and all the type goodies. It was largely because of this respect that Apple took the road it did instead of the road Windows and PC’s went. He stressed over details such as the rounded corners of the Macintosh for weeks (making everyone working for him crazy on the way).

He even had the opportunity to work with Paul Rand (one of the most famous and arguably the greatest graphic designer of all time) on a logo for one of his companies, NeXT. Rand was similar to Steve Jobs in the sense that they both knew (or felt) they were the best. He reportedly told Jobs (who asked for a number of options) that he didn’t create options for his clients.

“I will solve your problem, and you will pay me,” he told Jobs. “You can either use what I produce, or not, but I will not do options, and either way you will pay me.”

I was tickled (for lack of a better word) by that, because what graphic designer doesn’t at some point think something along those lines. Perhaps someday I’ll have the clout.

2. A big point to take away from the book (and in fact a point both Jobs and his wife wanted to come across) is that despite his genius, he wasn’t perfect. I would argue to say his work borders on perfect, but his personality was far from it. I’ll say it, he was crazy. A complete asshole. But he was brilliant. When he returned to Apple (after being fired), he knew they needed to set themselves apart by not only their visual aesthetic, but also their ad campaigns. He recognized that the client for Apple wasn’t your average business associate at a law firm, it was the creative type. Their original line was “Here’s to the crazy ones.” Their ad agency (Chiat/Day) came up with this poem (which I’m sure you saw floating around Facebook after Jobs’s death):

Here’s to the crazy ones. The misfits. The rebels. The troublemakers. The round pegs in square holes. The ones who see things differently. They’re not fond of rules. And they have no respect for the status quo. You can quote them, disagree with them, glorify or vilify them. About the only thing you can’t do is ignore them. Because they change things. They push the human race forward. And while some may see them as the crazy ones, we see genius. Because the people who are crazy enough to think they can change the world are the ones who do.

It worked. It was this train of “crazy” thought that revolutionized the music industry, the mobile phone industry, and the notepad as well as personal computers.

3. As a designer, I often get requests that make no sense or that I know won’t work (slash will be hideous). It’s part of my job to interpret what they’re asking for and translate it to something that does work. Jobs took a more radical approach, but shared a similar outlook on interaction with clients. He wrote this for the biography:

I’d highly recommend this book to anyone. I honestly don’t think I know anyone anymore without at least one Apple product (I mean, who hasn’t had an iPod along the way), but even if you don’t, from a business approach this is an excellent read. While I normally stick to a little fluffier novel for the beach, this was with me for 2 solid days (I read quickly, but I confess I toted this book to every meal I was so engrossed) in Hawaii.

Has anyone else read/or started it??